A celebration of life, light, color, feasting, shopping and being with loved ones: Visiting Kolkata and Mathura Cake Recipe

Part 1: Kali Pujo r mela (fair) in Behala and discovering Mathura Cake ( recipe at the bottom)
Although, it has been a while that I am back from home (where is home? Kolkata. Always!).  Yet my body is engulfed by laziness of being home, eating too much and being over loved.  And I am so, so loving it. Kolkata is an amazing place during the festive time and around the end of the year with so many things happening. Initially, I had made plans to write everyday on the places that I visit and the things that I do. I did actually manage to take a lot of photographs. However, writing was out of questions- it was too much of an over ambitious project. I gave up and no regrets. Period.
Now I am back- well to be honest forced to come back! I hate my office( I love my work!!!!!!!) and I am forced by my friends to write who think it is important that I try to be regular to make my blog popular. Do I need to be?  I do not think so. Hence, I have decided only write when I feel like. And being popular- ohhhhh I would love to be! Super star!  But not at the cost of losing the joy of writing and cooking. Therefore, from now on I might be very irregular or too much regular. Let the passion flow without rules. Period. Please bear with me. 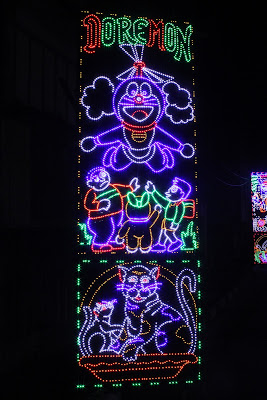 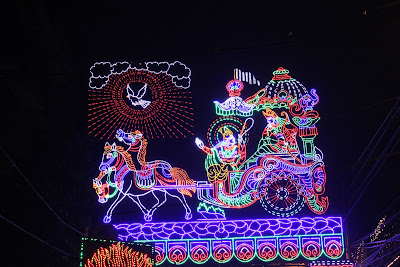 Now back to Kolkata and to what I wanted to share. My first day at home was the next of day Kali puja. So the house was still glittering with ‘tuni’ bulb ( LED lights actually but I like to think they are tuni bulb), prodip ( diya or clay lamp) and candles. My niece, nephew and brother ready with tarabatti, tubri, chorki, rong moshal (various kinds of firecracker that gives light but not sound).  And of course the famous Kali pujo r Mela (Fair during Kali puja) of Parnasree just 2 mins away. Nothing is a better start then this.
﻿

Kali the Hindu goddess is associated with empowerment. The name Kali comes from the word Kala meaning black, dark, or time. Hence, Kali-the violent and dark goddess is known as the goddess of time and change. In addition, Kali is the consort of Shiva who is known as the eternal time. In Bengali depiction of Kali, she is often seen standing on the body of Shiva who laid himself on her path to subdue her anger. She is also time manifestation of other Hindu goddess like Durga, Sati, Chamunda and Parboti to name the few.
Apart from being worshiped in various form ( eg The Bhavatarini form of Kali is worshiped at Dakshineswar Kali Temple, Kolkata or the Poteshwari form by some ) within households and temple, Kali is also an essential figure in Bengali literature, with devotees as Ramprasad Sen noted for  his shyama Sangeet. To listen to his music, you can visit the following link but may want to ignore the video (http://www.youtube.com/watch?v=4jLYr0qH-wg)
Kali Puja in Parnasree is very famous with some or other famous tollywood star coming to inaugurate the puja every year. There are three major puja pandal in Parnasree, which people around Behala never miss to visit. One of the pandal, by Parnasree club takes place near a lake with boating facility. Lights all around the lake with colored shadow over the flowing water, happy couple boating, tugging into each other’s arm, screaming excited kids with their parents, long queue of thrilled and waiting people makes a sight in itself. It sort of breaks the monotonousness of London life, brings color, sound and people closer to you. And not to mention the cultural programme every evening for three days starting just day after Kali puja. With each pandal competing with the other to get the best of singers, dancer or theatre artist  of west Bengal to perform, the residence( given priority for seats)  as well as outsiders have a opportunity see their favorite people perform, that too free of cost.
Kali Puja, which coincide with Dewali in rest of India, is also accompanied by fair in various localities in and around kolkata and outside kolkata. The Kali Puja fair of Parnasree, Behala, is a special attraction among the residents and flocked by tourist from across various parts of the state as well by foreign tourist visiting the city of joy.  Vendors from all over West Bengal, set up stalls to exhibit and sell their handicrafts.  You will see stalls for clay pottery, ceramic kitchenware, brass artifacts, Dokra jewelry (Dokra is the art of metal crafts amongst some tribes of eastern India. The tribes were initially nomadic in nature, but later on settled down on the planes of Bengal, Orissa and Madhya Pradesh. They continue their artisanship in making tribal jewelry, natural themed figurines of plants, animals and god they worship. Bronze is melted with lac and resin is solidified into alloyed wires, rods, and plates. Then the figurines are made with them. They are handcrafted, therefore, the shapes are not perfect), stalls of dry flowers, flower plants, garden equipment, plastic kitchenware , stalls of bits and bob needed for puja like stone plate and bowl, brass and copper plates, bowl, glass etc. it is like a treasure hunt-you name the object and you most likely will find it in the mela (fair).  There is also dedicated area for rides like toy train, nagordola (Merry go round), Russian boat, and giant wheel and of course the trampoline for the little one. The mela also had, u la la, gambling stalls. Not sure, about the legality, I was so tempted.
However, the major attraction of the mela are  stalls of the mela are the food stall selling all kind of street food of Bengal- Puchka, churmur, batata puri, bhel puri, chop, shingara, fish fry, ghugni, alu kabri, roll ( the famous kolkata roll) and not to miss, the ‘ all fair incomplete without it’,  Hojmi and Aachar stall ( pickle stall) and the pan shop. We have a batata puriwalla who puts his stall right at the end of the road leading to my house. I have no idea for how many years we have eaten from him, but he knows all of us just like any other member of the family. Every year he would come, ask about me, my mashi, my mother, didon & every one possible. We never tell him what to make for us and how to make. He just knows it. Sometime he would send them home without worrying about the money, as he knows he will get it before going home. Of course, we always get special price. And we face his anger in case found eating from someone else. We always do a little to irritate him, he knows that but still get angry. Now we eat from his son who have a permanent stall in Parnasree Bazaar. In mela, we made family with someone and I am sure everyone of the visitor have done the same with someone or the other. 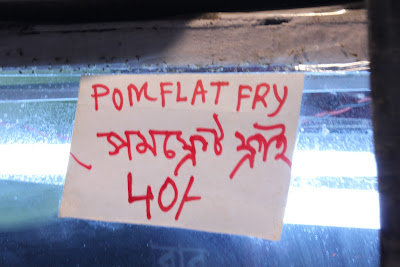 Among all these treasure, I discovered ‘Mathura Cake’ –recipe of cake will come soon. Let me tell you about the taste. It is awesome, melts in the mouth, sweet and fluffy. I do not know how many I eat. The stall was run by two Bengali boys from Mathura. They mixed their ‘Krishna love’ as they said in making it and it seems we will not be able to make anything close to that.
The motivating part of such fair is, the artisan can sell their handicraft directly to the buyers avoiding the intermediaries. This also affects the price of the product making it much cheaper than buying them from shop. The artisan also get the price of the product directly with not having to give any cut to the middleman and hence increasing their profitability. 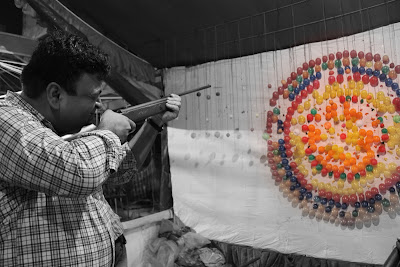 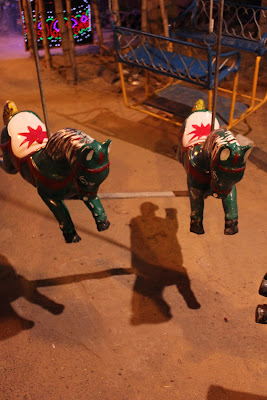 The celebration, the color, the crown, the eating together and the hunt for the perfect shaped pottery makes it a special day out. Children hanging on to the hands of parent and eager to go to the rides, foodies flocking the food stall, mothers busy buying the kitchen ware, boudi’s  ( sister in law) buying plastic flower for bedroom, and teenagers, dressed in their best busy  trying to catch eye of their heartthrob – makes it all the more fun. Nothing could have been a better start of the holiday then visiting the fair right across my home. 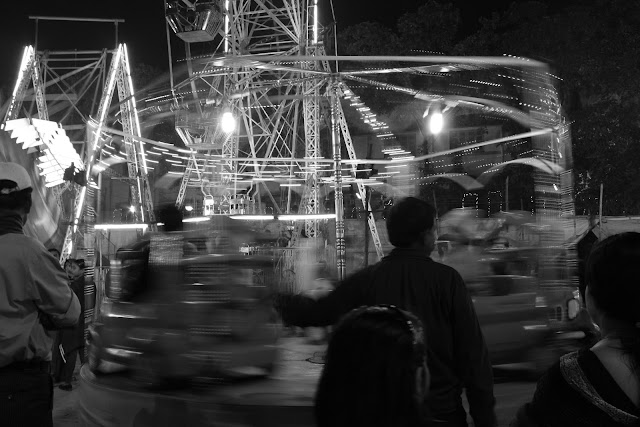 To see all the photos from Kali Puja and Mela, please log on to my Facebook page, Pet Pujo and Adda
Now sharing the recipe for Mathura cake as shared by the cook himself : 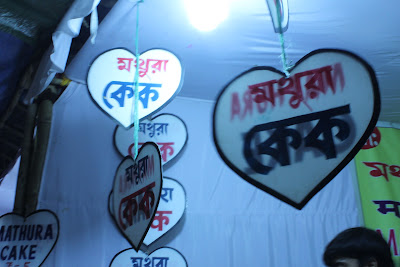 Ingredients
(The measurements are as given by the maker. It is not a tasted measurement by me. I made with the ingredients but did not take a note of the measurement. Just used my sense. They came beautiful. So feel free and use as you please) 200g flour
100 g milk solids (khoya)
250 g sugar
250 ml milk ( little more if needed to make the dough)
1/2 teaspoon cardamom powder
1/4 cup cashew, chopped
¼ cup almond, chopped
¼ dry cherry, chopped
Lots of oil for deep frying

2. Add sugar and cook. Till will be a thick, semi liquid dough
3. Add the flour and make bread like dough (so that easy to make rounds with hand)
4. Add cashew and almond and cherry and combine well
5. Make round and shape them like doughnuts
6. Fry then in deep oil until golden brown
7. Serve them hot, sprinkled with sugar dust 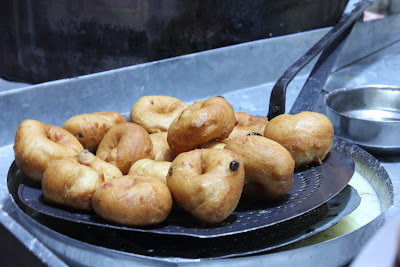 You can sprinkle cinnamon sugar dust I believe and they should taste nice actually. Hmm.. I will try that. It can also be a good start to Christmas eating  spree.
A celebration of life, light, color, feasting, shopping and being with loved ones: Visiting Kolkata and Mathura Cake Recipe